Meeting my heroes and learning about exciting developments- clomipramine and the ketogenic diet.

Brain Tumour Research is one of the few charities I know that supports the metabolic approach to managing cancer through the use of novel agents and dietary intervention. Ever since I moved from The Royal Marsden to Charing Cross Hospital I have had continued support and encouragement which was previously lacking. This is the type of resistance I continually experienced 3 years ago but I soldiered on regardless, believing in what I was doing from the countless hours of research I had undertaken. I showed them all my research but they didn’t want to change their opinion. I saw 5 different neurologists who all gave me the same responses. I’ve been off medication for a long time now despite being told I would need to be on it for life. 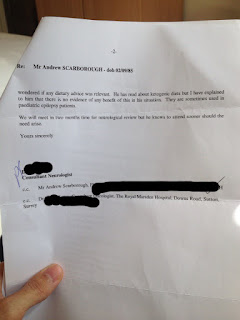 The move was truly liberating for me and I have worked incredibly hard to achieve the success that I have had over the last 3 years. It makes me emotional at times and on the verge of tears as I recall the resistance I initially experienced from various health professionals and then think about the incredible successes I experienced over the last 3 years both on scans and symptomatically. Experimenting and researching on your own when you are experiencing horrible seizures and debilitating symptoms daily tested my resolve and my conviction several times over this period.

After my mother was diagnosed with oesophageal cancer not long after my diagnosis as a consequence of her osteoperosis medication (we were actually able to prove this!) my resolve was tested further. She never smoked and seldomly drank alcohol, when she did it was simply a small glass of red wine. She has always been a picture of health and has followed a healthy lifestyle. Upon diagnosis of her cancer we asked about the pathology and the findings from the diagnostic endoscopy and found the following to be true in my mother’s case: 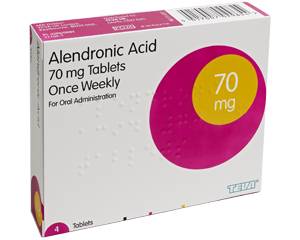 We noticed that time of use exponentially increases risk of oesophageal cancer from this treatment. This is never explained to patients as a risk factor despite a clear correlation and my mother was having this treatment over many months before stopping it after severe discomfort from damage to her oesophageal lining. After diagnosis we contacted the researchers of several studies showing this correlation and they confirmed our hypothesis for my mother’s individual case following the biopsy results and presentation. We considered legal action and heard from patients in the U.S. who successfully sued the company but the cost was too much and the process too complicated to pursue things further. Another problem with osteoporosis diagnosis is that if you have East African bone structure (small bones with a slight frame) as my mother does, you will always be diagnosed with osteoporosis because you are compared with an average, younger white European woman. She is doing well now and we applied a metabolic approach to manage the disease.

I digress, back to Brain Tumour Research… 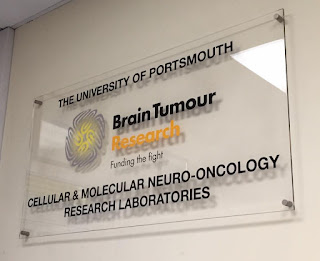 Yesterday I had the immense pleasure of meeting some of my heroes at the Brain Tumour Research centre in Portsmouth. It was incredibly exciting to meet pioneers in this field who are researching novel methods to treat brain cancer, away from the standard of care which has been a dismal failure for so many years.

I had so many questions in my mind that I wanted to ask the researchers I had admired for so long on my journey of managing my cancer as a metabolic disease. I was not disappointed and learned so much useful information for even the most devastating situations anyone could experience with this disease. It blew my mind how much these researchers are swimming against a tide of resistance and little funding yet achieving such remarkable things through tireless hard work, persistence, determination, and compassion.

As I arrived at the centre I was met by Tim Green who is an affable representative of Brain Tumour Research whom I had met before through volunteering at the London Marathon recently. I was then introduced to Professor Geoff Pilkington and Professor Helen Filmore which made me quite nervous as I admire their work so much and had so many questions in my head to ask.

A small group of us (6 people in total) then attended an introductory talk by Professor Pilkington, who went into detail about the incredible work Brain Tumour Research is funding. I have always been skeptical about where money goes for other charities, but never Brain Tumour Research as all of the money goes into work I support and every penny goes into the research, nothing else! The talk was primarily about re-purposing drugs using the right combination and the correct therapeutic doses for individual patients and different types of brain tumours. This is very similar to the famous Ben Williams approach, a drug cocktail of cost effective, non toxic drugs with a high safety profile. I try to copy the effects of this approach with a restricted ketogenic diet, fasting, supplements, and lifestyle adaptations.

When I asked Professor Pilkington about other long term survivors he reeled off a few names who had astounding results and they all appeared to be doing the same kind of thing. One question I had was about metformin and the conclusion is that it is very difficult to get this to the brain and for it to be therapeutic even though it may help to lower blood glucose which can be desirable of course. It may be useful for other cancers, but perhaps not brain cancer directly. Treatments must always be personalised, considered, and at the correct therapeutic doses with the right combination of approaches. This can be a challenge!

The ketogenic diet, as I had suspected, is most likely more efficacious for brain cancer. The main benefit is that is mimics a fasted state, people are quick to forget this sometimes. He was also interested to hear about my use and timing of exogenous ketones (we know the ketones themselves have anti-cancer benefits irrespective of blood glucose readings- though obviously not too high!). I explained my entire approach, my type of ketogenic diet, use of hyperbaric oxygen therapy, fasting, and curcumin. I was applauded on my dedication and my ability to be proactive with this metabolic approach. I stated that I am continually trying to push myself and wanted to add more things to it but I was informed that you can of course do too much and sometimes, as I agreed, less is more.

What you don’t do can be more powerful than you do and I narrow this down to a restricted personalised ketogenic diet, high DHA, curcumin, exogenous ketones at strategic time periods, hyperbaric oxygen therapy, vitamin D from the sun and natural light cycles, and fasting.

During the talk I was struck by how effective clomipramine + a ketogenic diet can have in a short space of time on recurrent glioblastoma, probably the worst situation you could imagine with this disease (horrific prognosis). Very useful information if you are only given a few months to live.

Clomipramine is a tricyclic antidepressant used for the treatment of obsessive compulsive disorder, panic disorder, and chronic pain.

‘Prof Pilkington has been researching drugs called tricyclic antidepressants at the University of Portsmouth since 2003.’

‘In the lab, clomipramine attacks the mitochondria of cancerous cells – the parts of cells that release energy from glucose, and power the growth of a tumour.’ http://www.bbc.co.uk/news/health-29440314

The image below shows a patient who contacted Professor Pilkington after his astonishing results, this is not a one-off as many other patients have had similar results. There is continuing frustration with the clinical trial system, we need to be able to document all these success stories as a group as opposed to many individuals who are mostly self-treating themselves. It is very difficult to get trials for these low cost drugs with high safety profiles. 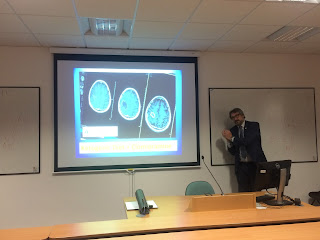 The main challenge with clomipramine for brain cancer treatment is the side effects, particularly for brain tumour related epilepsy as it makes you more prone to having seizures. I proposed to Professor Pilkington that this could maybe be mitigated through high dose magnesium supplementation to mitigate this effect. He found this proposal very interesting after I had explained how magnesium chloride acts as a major application that I implement routinely to manage my own seizure activity. I also shared my experience with hyperbaric oxygen therapy, explaining that my experiences of seizure activity in the chamber was actually a positive thing to have as it showed the treatment was working, validating my approach despite being uncomfortable. As I reached a high level of blood ketones and adapted to the treatment my seizure threshold had increased. I suspected that similar adaptations could be made for improving tolerance to clomipramine for patients with brain tumour related epilepsy.

We then went on the discuss the anti-tumour benefits of sodium valporate and levetiracetam (two anti epileptic medications that have anti-tumour benefits- which is why they are prescribed for brain cancer patients), however I went on to explain how these drugs would be more effective in liquid form keeping in mind that the fillers of these drugs in tablet form make them anti-ketogenic (maize starch for one). I also personally believe that a quality magnesium supplement complements a ketogenic diet nicely as it doesn’t give you any micronutrient deficiencies compared to anti-epileptic drugs, it keeps blood glucose low, and it acts as a central nervous system depressant to better control seizure activity.

After a lab tour we had the chance to ask Professor Pilkington and Professor Filmore questions about their work and I could write a book about that alone! There are so many promising treatments they are looking and it is remarkable what they can do with such little funding. These are my heroes and I really enjoyed my experiences being shown around the lab, seeing all the different ways to look at brain tumours, and gaining a better understanding of metabolomics, drug interactions, therapeutic dosages and applications of re-purposed drugs, challenges of treatment for different types of tumours, and personalised medicine. I am thankful for the opportunity to discuss these things with such inspirational individuals. The families who have funded so much of this research through the loss of loved ones are equally inspirational and I must express how grateful I am for their support in such difficult times. 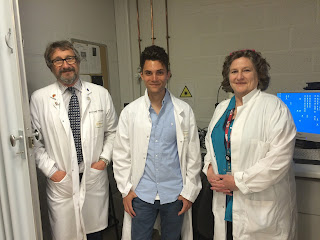